With some delay, I am sharing my impressions from the first conference day of “More than Pretty Pictures – the Aesthetics of Data Representation” (14th of April, AIAS). As it turns out, the workshop day was just the tip of the iceberg, as the levels of excitement are actually increasing.

Again, to follow the structure of my first post, let’s start with the official information. The 1st conference day was divided in 3 official parts (a keynote lecture and two paper sessions) separated by brakes for coffee, lunch, and lots of socializing. All in all, great day, full of inspiring talks and even more inspiring conversations in the brakes, which finished with a reception at the conference venue. I didn’t even try counting how many people were at the conference or the reception, but the conference size is not overwhelming. The communication flows quite organically, even though, as  I mention in my previous post, there are scientists from many different fields, artists, and even industry representatives.  To me this is the most successful inter-disciplinary meeting I have attended in the last 3+ years.

So, next I am going to place some of the notes and pictures I took. I am doing it mainly from egoistic standpoint, as I know that I will most probably throw away or loose my paper notes. None of the information (links, slides, ideas etc.) are mine; I am merely sharing someone else’s work. I think it is better to be out there in the internet, but if someone of the presenters feels bad about it – I will remove/censor it. Just leave me a message… 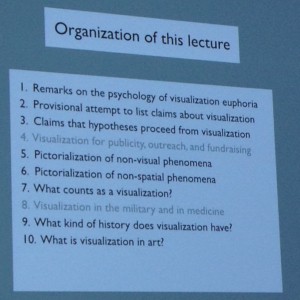 James Elkins is a professor of Art History, who is leaving Art History to work on experimental writing, and who has an impressive amount of publications. He gave a talk on current conceptualizations of visualization (the outline is in the picture).

What was great about that presentation was how many questions were raised. I think this is the first time I hear about “visualization euphoria”. He spoke about the infographics and why are they so popular nowadays. He showed us the infographic “Infographic Is” visualizing the difference between data, sorted data, arranged data, and presented visually data with Lego bricks. There is this notion that data is fundamentally cluttered, that information is best when designed, that it attracts more viewers than text, and it leads to viral success. While I was listening about the part with the visualization euphoria I felt a little bit ashamed that I actually fall into the group of people, who suffer from this widespread disease/symptom “visualization euphoria”.

The rest of the talk was not about infographics, but about visual content in a more general sense. He listed some provisional claims about visualization (about its functions). Then, there was an interesting topic, which was actually discussed further in other talks that day, namely “Does visualization generate hypotheses?”. This was discussed with respect to scientific data visualization. Then he moved onto the pictorialization of non-visual and non-spatial phenomena and what counts for a visualization. I think I have spaced out at that point of the presentation (or I didn’t want to spoil the fun with taking notes). But after that, he looked into the visuals used in the mathematics and how geometry and geometrical solutions of equations have been on and off… I was a little bit puzzled at the point when he said that around 19th century (or maybe it was earlier) the mathematics moved away from visualization. I guess the mathematical science has moved away, but the mathematics that I studied (both in school and in university) was quite visual. For example, we spend a whole semester in university (1st year) doing all sorts of projections and sections as part of a discipline called Descriptive Geometry. I guess it is important for future civil engineers and architects to know how to design an intersection between cone and sphere. We had of course also the type of mathematics that is heavy in only analytic solutions, i.e. no visuals. But then again, most probably he was talking about the new theories/subjects in Mathematics from a science history perspective and not about the trends in education in Mathematics.

I don’t remember in what context the Buddhas of Bamiyan and their destruction by the Taliban came up, but I was “Oh wow! How did i not know about that?”.

I am glad I witnessed this keynote lecture because I actually expanded my horizons. I don’t believe I have enough background to fully comprehend what James Elkins was talking about, but even though I am an outsider, I enjoyed listening and watching him talk.

The first presentation was by Nina Samuel, who’s a postdoc at Zentrum für Literatur- und Kulturforschung, Berlin. She is an art and science historian and independent curator (according to her academia.edu profile). This was my first conference presentation, where the presenter reads. Many more reading from paper presenters followed and later that day I found out that this is something normal in humanities. I think it has to do something with the precision of language. I feel incompetent to comment her talk. Her talk was with the title “Images as Tools: Digital Microscopy between Data, Imagination and the Psychology of Perception”. 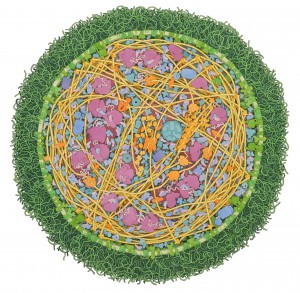 The second was by Ditte Høyer Engholm, a PhD student at Aarhus University, Denmark. The most fun and honest scientific presentation I have seen. All drawn as a comic strip. Last year at EGU there was another PhD student who did something similar on some computational geoscientific topic and I was blown away. Ditte’s PhD project is “Visual review of the bacterium Streptococcus pneumoniae” and has just started (2-3 months ago). The project is about producing a water colour painting based on science about strep. pneumoniae bacterium. She (the project) is inspired by David Goodsell’s illustrations (the colourful thing to the right –>), which are not just pretty pictures. Ditte is documenting everything, including her personal frustrations, methods, assumptions, decisions etc. at her PhD project internet site (visualizationlab.au.dk/projects/strep-pneumoniae/). I strongly recommend it! I think it has a potential to become the new PhD comics. It is quite ambitious project and I would be really curious to follow the progress.

The third presentation was by Anna Emilie Skulberg (couldn’t find link to her university profile), a master student at Modern Culture, University of Copenhagen. Another interesting talk that expanded my horizons, this time into Astrophisics and the Universe.  Her presentation was with the title “The Illustris Visualizations: Simulating the Cosmos“. I didn’t know what Illustris is, so I was hypnotized by the simulations she was showing at the background while giving her talk. So instead of talking about her presentation (I am not qualified to do that), I decided to post the youtube video I found in the Illustris internet page.

The first presentation in the afternoon session was by Paul CaraDonna et al. with the title “Transformation, abstraction, and reassembly of information: on art-science exchange informs perceptions of nature“. The presentation was about the art-science exchange program at the Rocky Mountain Biological Laboratory and the latest artist-in-residence. Mark Dorf spent some time at the field station interacting with the ecologists (and the other scientists there) and tried to understand the scientific process and maybe to challenge it. He was inspired by this stay and came up with some art (see Emergence). One of the pieces shows a photograph of a mountain, which looks real, but is a collage from many many pictures and if you look closer – it doesn’t really make sense. I’m not sure I can say more about that topic… it was an interesting presentation with many scenic photos. Here I’ve chosen another image from Emergence, which I find weird, but somehow intriguing.

The second was by Fiona Davies (Australia) with title “An Ethnographic approach to Arts/Science”. Can’t say much about the topic… it was about ethnographic museums, methodologies, and the artists as collectors of artifacts. Or maybe not?! That’s the risk when you attend multidisciplinary conferences (and not even in the natural sciences themselves, but in humanities) – difficulties to understand the talks or the specific language/terminology, not having the background…

The third presentation was by Thomas Bjørnsten & Jan L. Stephensen with the strange title “Making sense of environmental data through trees, flowers, and pigs’ lungs“. They presented few interesting environmental-art projects aiming at raising awareness. For example, the Coal fired computers by YoHa. On the poster of the exhibition (or event?!) there is an estimate on how many black lungs are resulting from the production of computers. There were some other interesting references in that presentation, also about citizen scientist or citizen artist, but my notes need a specialist in decoding at that point.

The last presentation before the reception was by Mette Høst, who’s an artist in residence at the Neils Bohr Institute. She gave very inspirational talk on “Art and Physics” or how it is to be an artist in this scientific environment. She was talking about creativity and how scientists are seen as these serious borderline boring people. I cannot really summarize the talk, but I was so so happy to have had the chance to hear her talk. I think there should be a little bit more art in each scientific group/department. Not just when it comes to creating scientific figures/posters, but also with respect to the working environment and the working process. This talk was really important to me, as I never quite understood how it is expected from me to come up with great ideas while sitting at a desk and staring in a monitor. She also presented some of her work. One of the first assignments was to create posters representing each of the groups at Niels Bohr. A task which required comunicating with the different researchers. I can only imagine how awkward was that.