The 30 Day Map Challenge is a global social media (mostly twitter) event, where all participants make and share maps based on daily prompts. My first attempt to join the challenge was last year (2020), but I shared only few maps then, and mostly, I just looked at the hashtag entries. The challenge gives us the opportunity to learn something new, to exchange knowledge, and to get inspired. Many people were asking why I "waste" my free time instead of working on papers/proposals etc. First of all, I don't see it as a waste of time. Second, this year, I actually did something work-related, which did not have a "project number", so I could not do in my working hours. The idea was to look into the spatial distribution of the groundwater monitoring wells in Denmark (GRUMO wells). I have been using different water chemistry data from this network, but I've never really spent time exploring the spatial distribution of the wells. I also used the 2021 challenge to try different types of spatial analyses or visualization types, which under normal circumstances I would not use, or would not have time to use.

So, as planned, I used the same dataset and template during the first 1-2 weeks. I found out that using the same dataset is quite limiting and gets boring. Here are the first 8 maps I prepared (it is a slider, so click on the arrow to see maps 2-8). 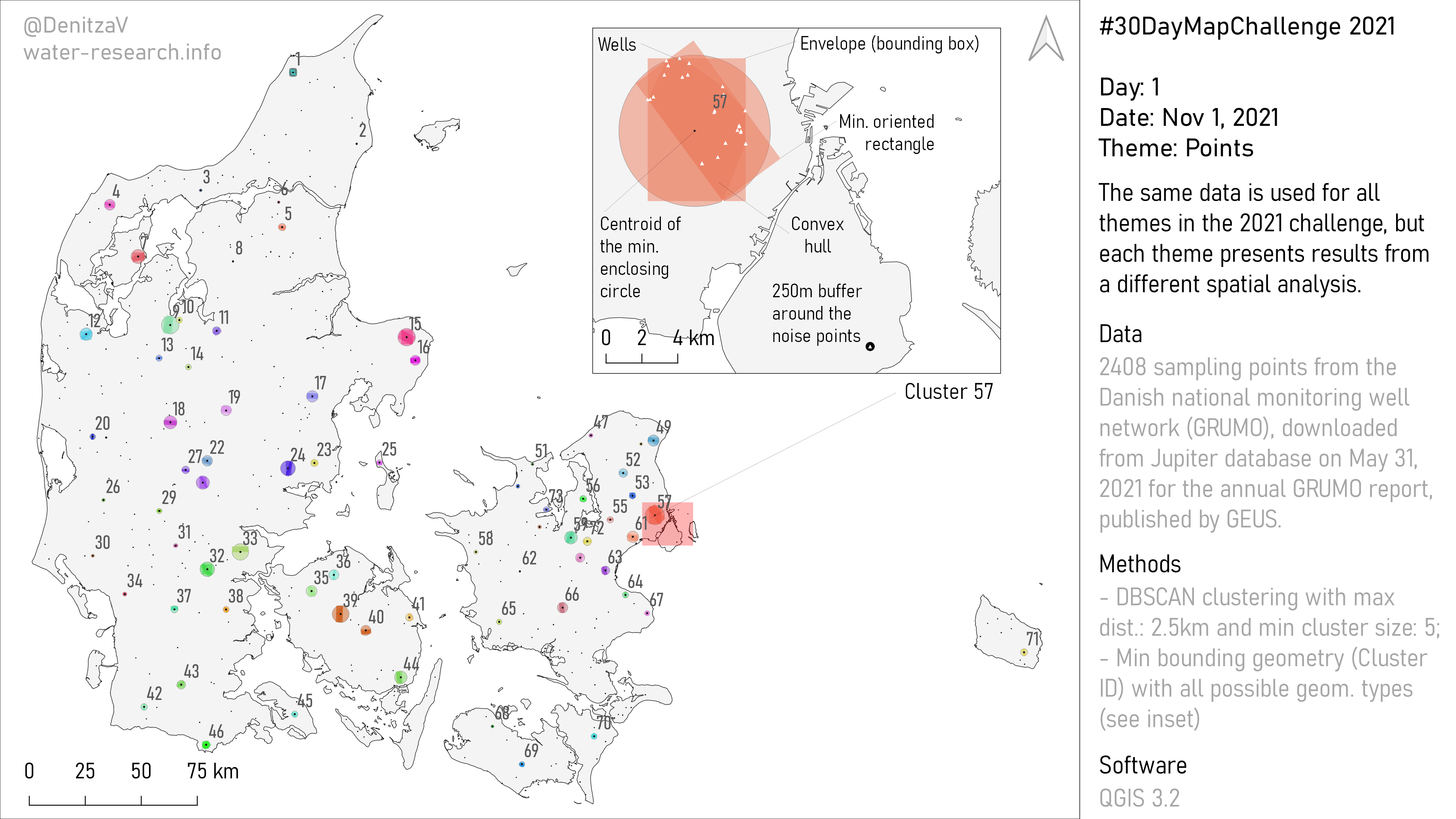 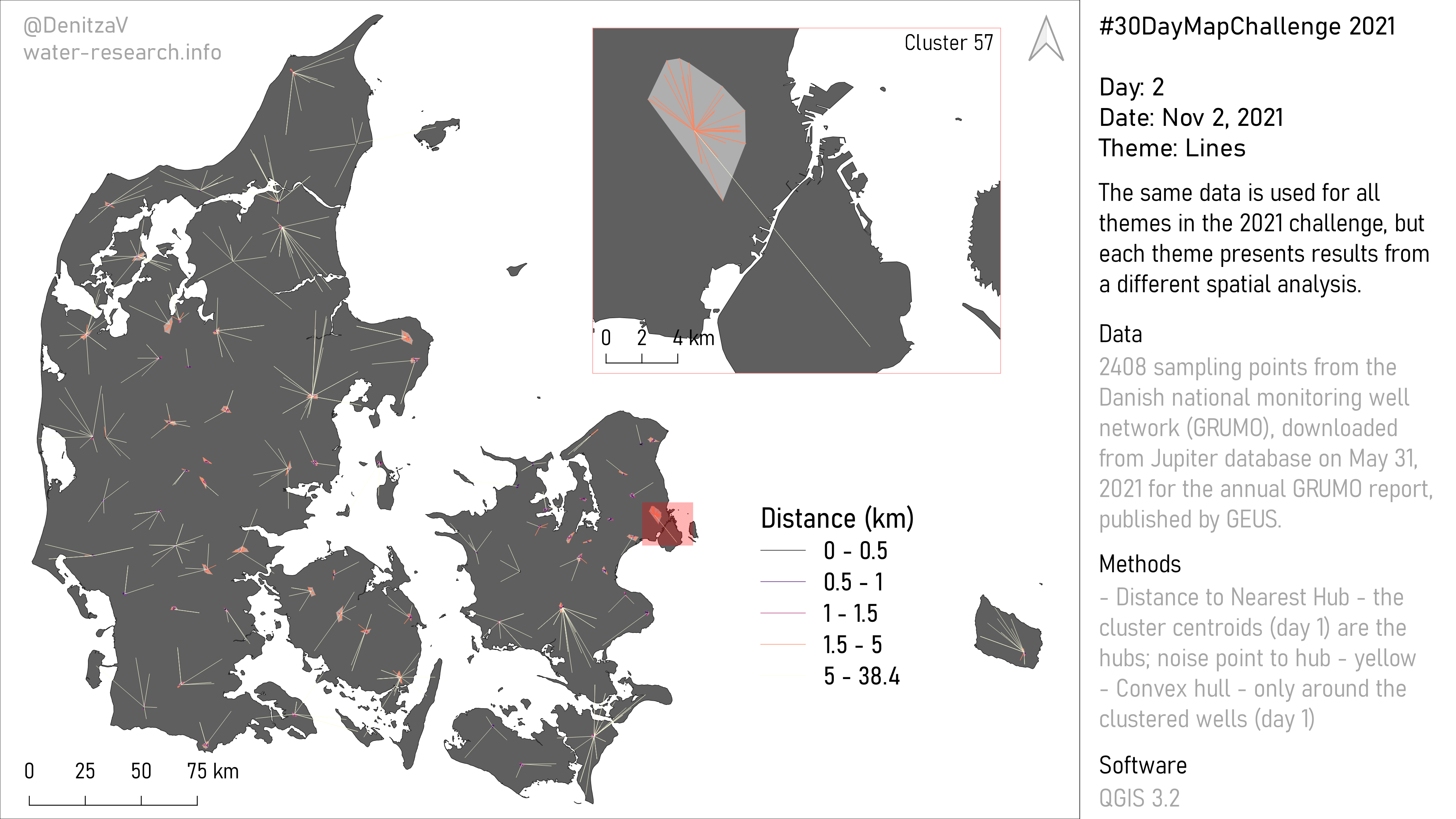 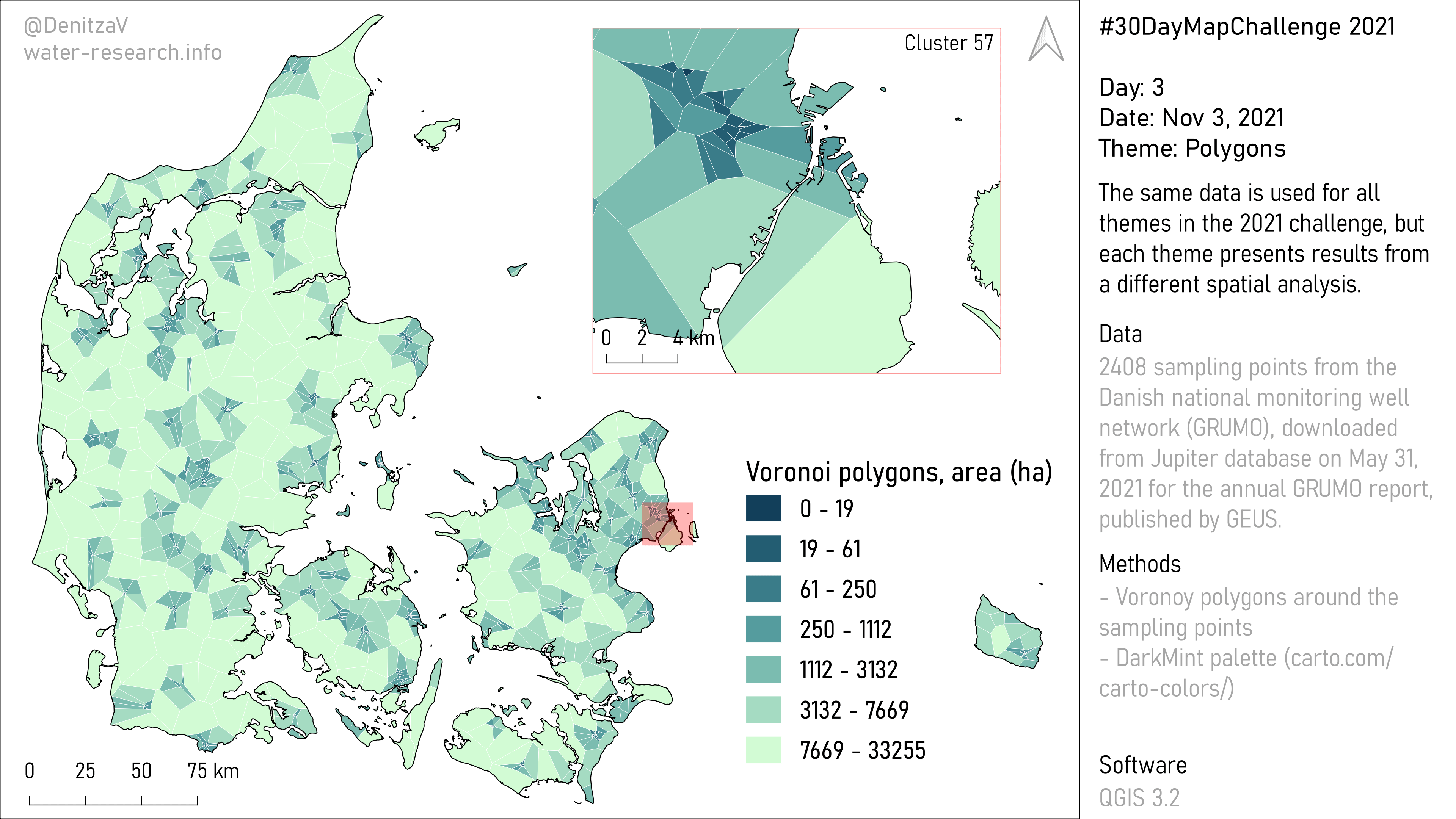 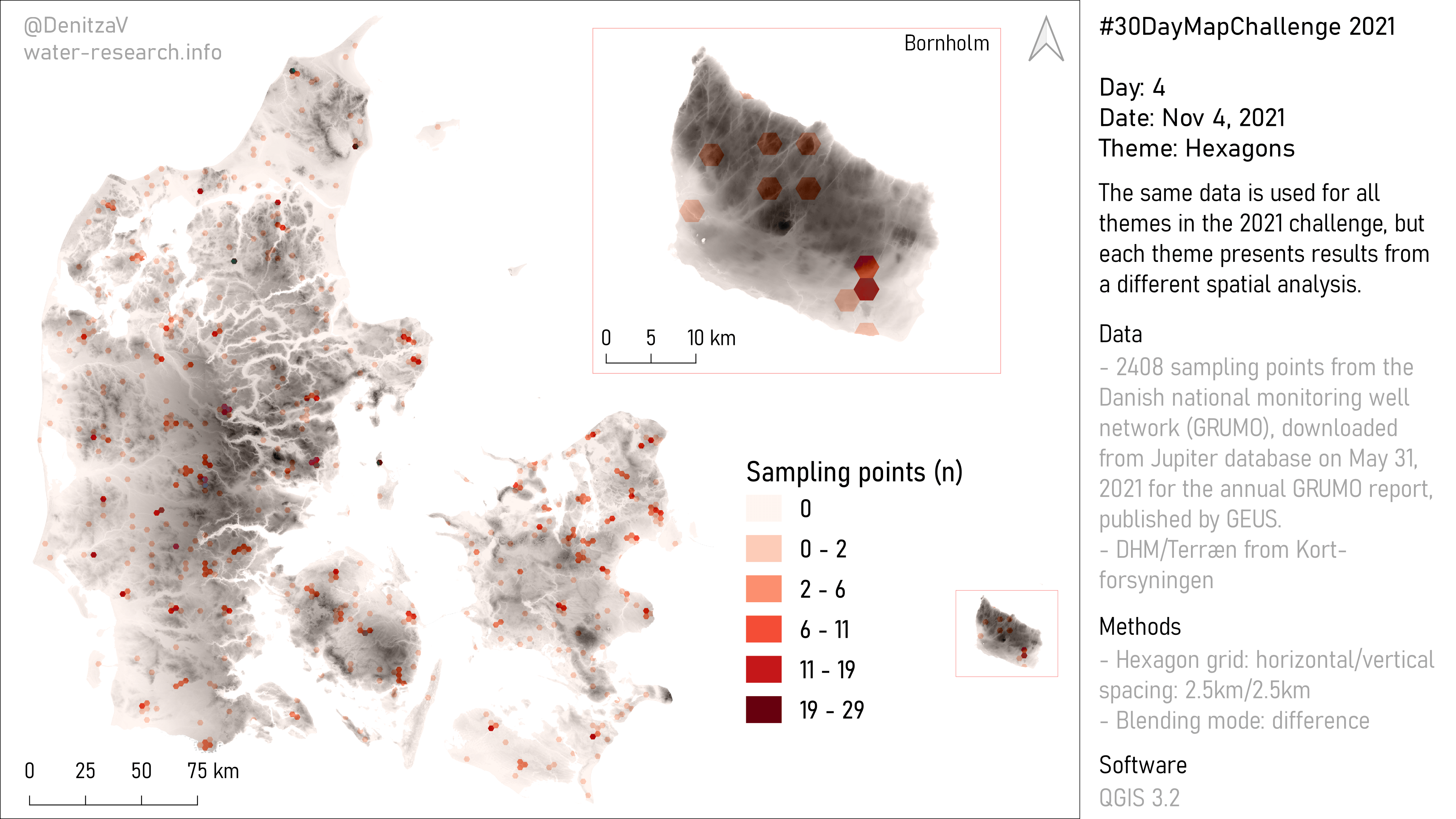 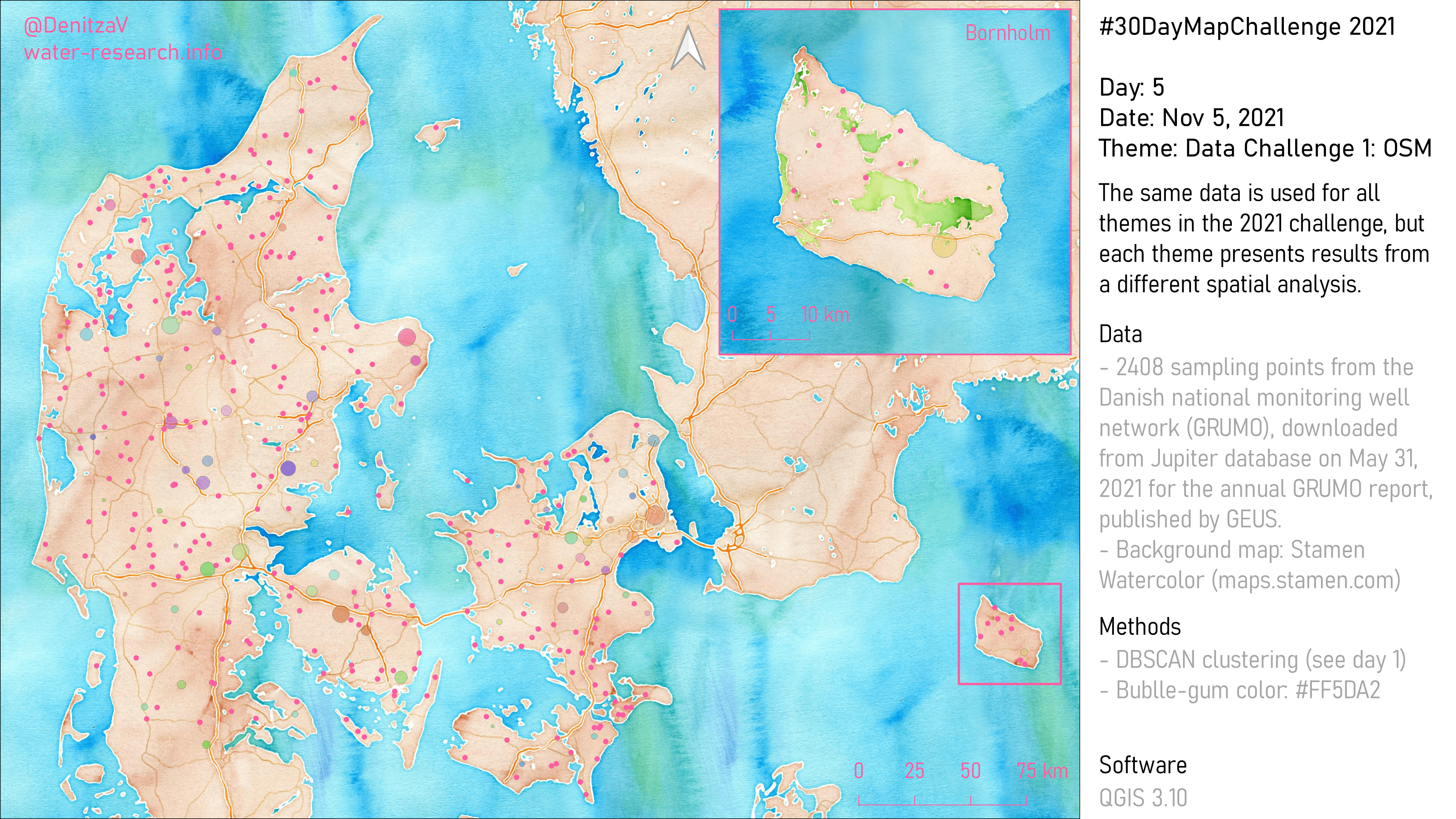 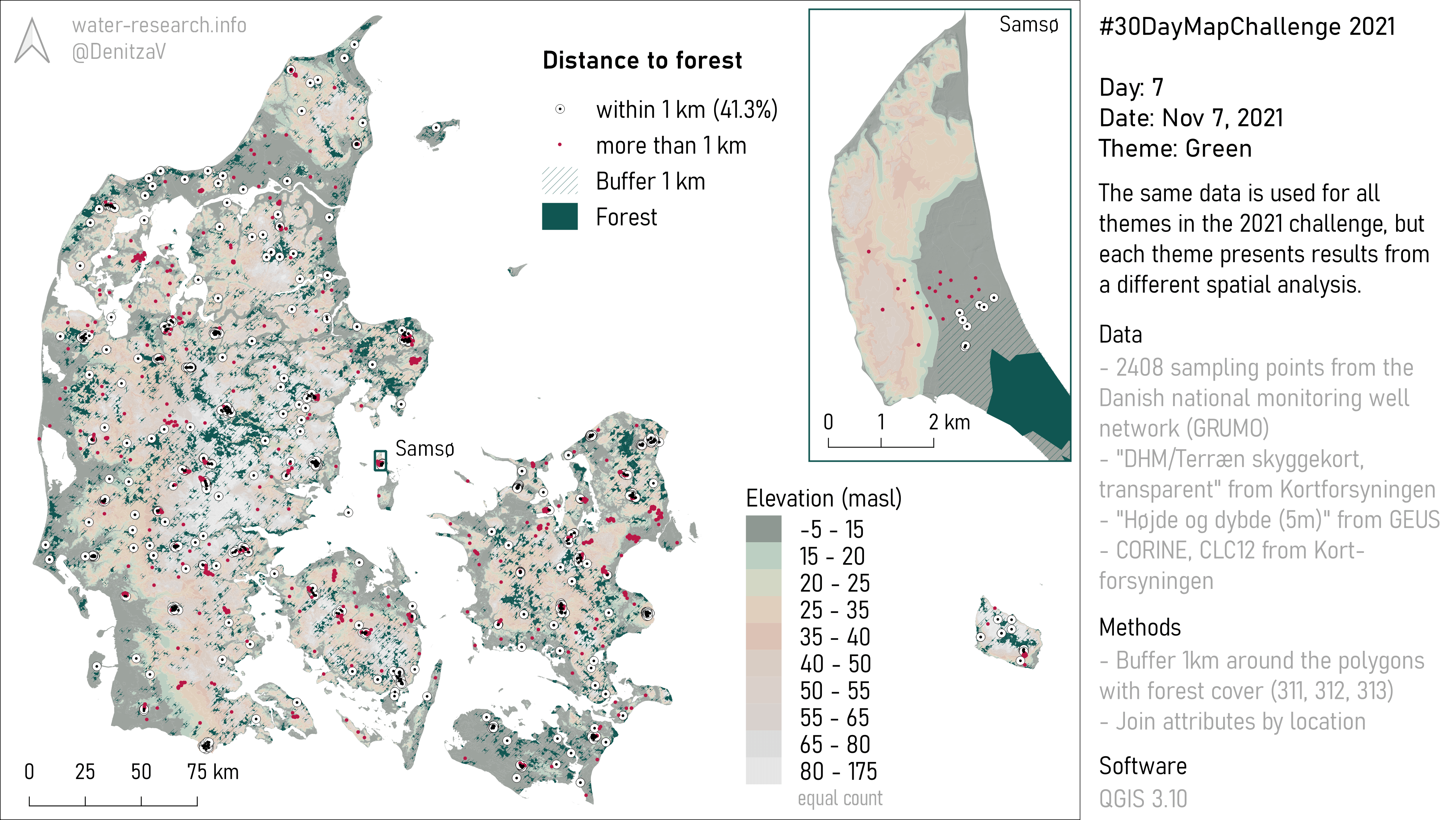 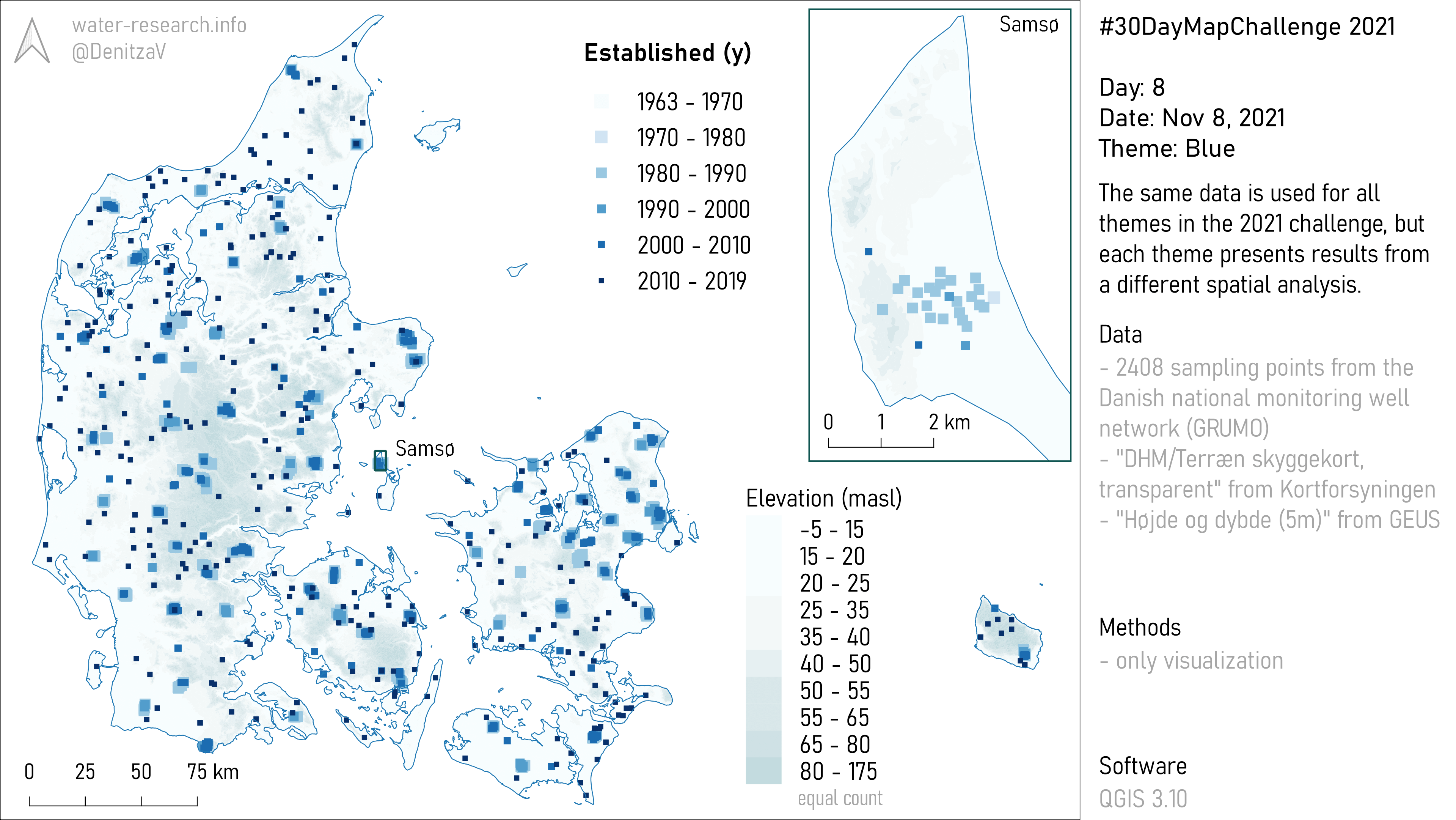 By this point I was getting tired of mapping the same dataset, so I decided to do something related (at least indirectly) to the Bulgarian elections. We had to vote for parliament 3 times this year, so that's taking a lot of my attention lately. There have been a lot of discussions about the low voting activity, but actually I haven't seen that many discussions (and numbers) on how many Bulgarians live abroad (and where specifically). Thanks to Danmark statistik, we have pretty good idea on the official residents from Bulgarian origin, living in Denmark. The statistics is broken down by sex, municipality (based on the current address), country of origin, nationality etc. I downloaded the data and prepared a map and few graphs. I wanted to use the colors from the Bulgarian flag, so that's the result. It is questionable, if it works from a design point of view... but I did not want to spend a lot of time on this either. 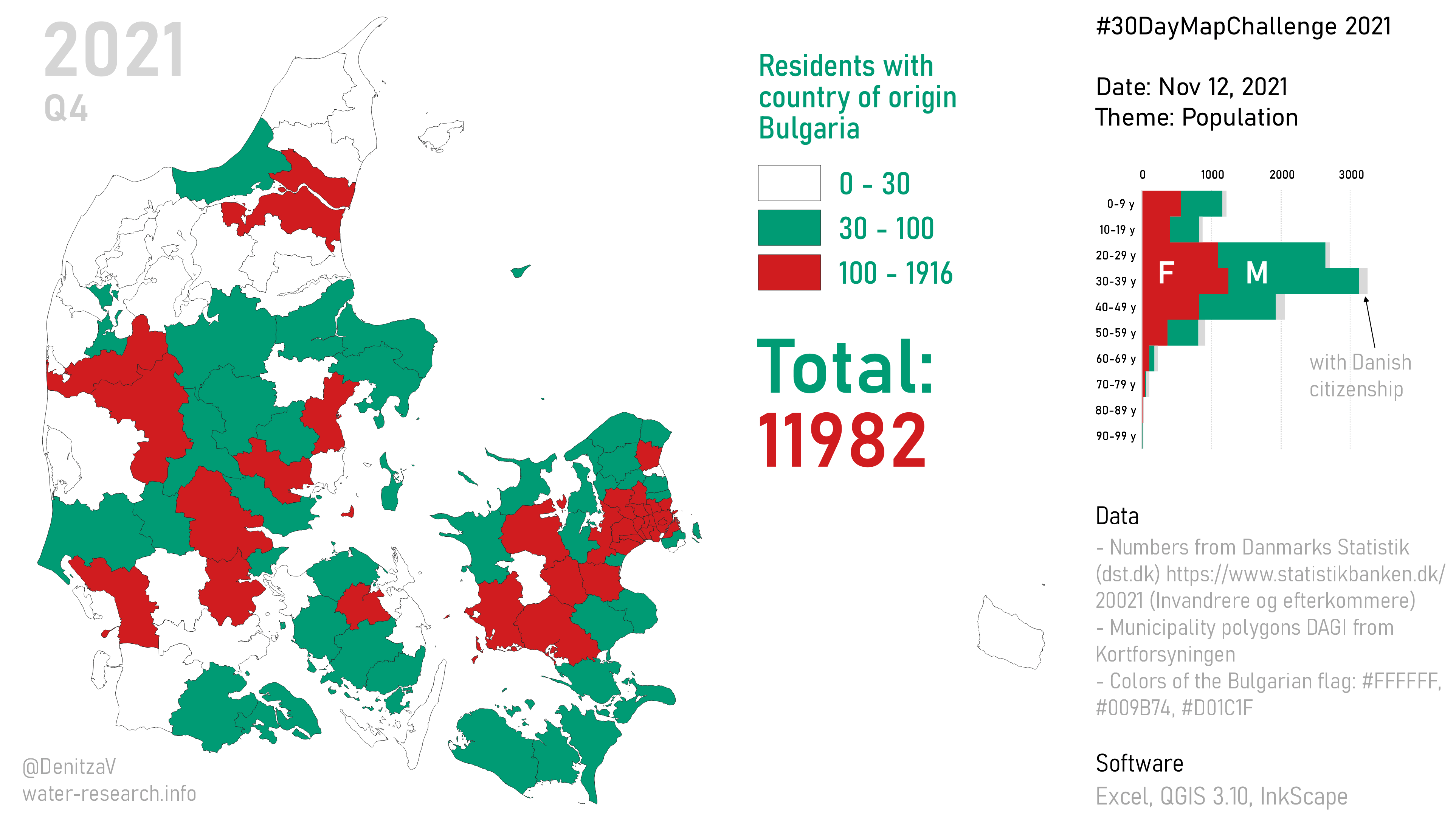 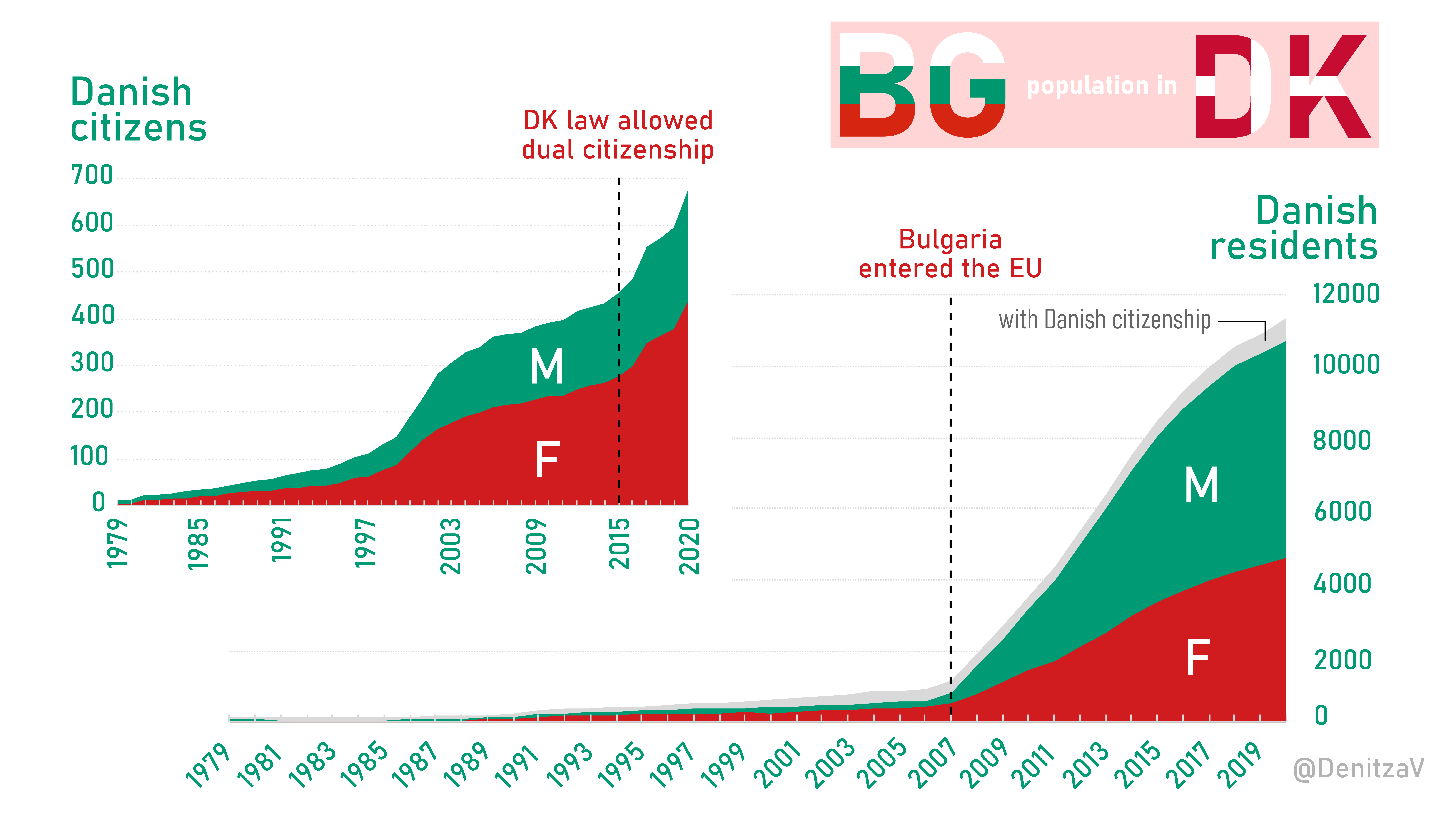 I have been experimenting with linoleum printing for the last year (on and off), so I thought it may be a good exercise to try to make a map. It all started with quite ambitious map (see below). I made the map in QGIS and finished the design in InkScape (adding the logos of the 3 GEUS departments that work quite extensively with the GRUMO data. Then I realized, I need to mirror the image before I transfer it on the linoleum. Then, I used a linoleum cutter for carving, and water-based ink for the print. Both the ink and the paper type were new to me. In addition, this was the first time I used softcut linoleum. Up to now I was using traditional linoleum, but I quite like the soft one because I find it easier to work with. I think I will continue using softcut in future. So, overall this was very experimental, but I think it turned out quite ok. I am planning to use the block to print invitations for family and friends. So, again - not a waste of time 🙂

By this point I already gave up on the challenge, but could not resist doing something for the "Water" prompt. Since the GRUMO wells don't fit well within the prompt, and I could not get an idea how to fit them, I decided to use different data-source. Here I experimented with multiple buffers and a new color palette.

I felt a bit bad for quitting the challenge too early, so this was the last attempt. I got back to the original idea, so I can close the circle...

Collection of my relevant tweets

I don't really want to repeat all the details for each specific day, so instead I have collected here all the tweets with my entries for the #30DayMapChallenge, edition 2021. Hopefully next year I will get into the cool 3D stuff everyone seems to know how to do. The challenge is over for 2021, and I think I did great, or at least I did what I planned for "5-7 maps, ... all based on the same dataset". Let me know what was your favorite map!

It’s starting tomorrow! How excited are we? My goal is to participate with at least 5-7 maps this year, all based on the same dataset. Can’t wait to start mapping for fun (not for work)! However, the boundary is very blurry 🙂 #30DayMapChallenge by @tjukanov pic.twitter.com/xbdqfkH4rY

Here we go! I'm exploring the Danish national groundwater monitoring network this month. The network's been evolving since 1987. This Nov, I'm trying to find out how clustered it is & ultimately, how representative it is. #AUGISday #30DayMapChallenge pic.twitter.com/T4ycl54sf6

Day 2: lines #30DayMapChallenge
Distance from each GRUMO well to the nearest cluster centroid. The wells not-belonging to a cluster (see day 1) are with yellow lines.
I never use dark background on the sci. figures (too much ink-waste), so I wanted to try it here. pic.twitter.com/PmYcsuqRA3

Day 3 (polygons) #30DayMapChallenge
We can't do without some #Voronoi polygons! I used the GRUMO wells dataset again (see days 1&2). The darker the area - the more dense is the network. Colors: DarkMint from https://t.co/nz08WvQaiS pic.twitter.com/HftIVa0GVs

Day 4: Hexagons #30DayMapChallenge
It is kind of a #heatmap - showing the number of sampling points from the national groundwater monitoring program in a 2.5km hexagons + I tested some blending modes, because it becomes a bit boring to plot the same dataset 🙂 #QGIS #AUGISDay pic.twitter.com/oyhhuoOo5G

It's Friday, so I went full bubble-gum watercolor for the Day 5 of #30DayMapChallenge. I'm not sure if it meets the challenge, but I had to learn how to add XYZ tiles after a lot of googling of OpenStreetMaps and QGIS 3.10. #StamenWatercolor Same data as previously... pic.twitter.com/Eo8MHzjSIu

Day 6: Red #30DayMapChallenge#Arsenic and nickel in wells used for drinking water supply, exceeding the national threshold values. The maps are from our open-access paper on NBLs https://t.co/eOUgXft0q1 (click for details).
It's the BK (Boringskontrol) wells today, GRUMO. pic.twitter.com/nGUguVve8h

Day 7: Green #30DayMapChallenge
There is only ~14% #forest cover in Denmark and a bit less than half of the GRUMO wells are within 1 km from a forest. Cluster 25 is on the island Samsø, which I chose today to zoom into. pic.twitter.com/j4qkBp4nyI

Day 8: Blue #30DayMapChallenge
I took it literary - the color blue.
So, here is a map showing when the groundwater monitoring wells (GRUMO) were established. You can read more about it here: https://t.co/IXS9ZeMkgT (see Appendix 2.2. & esp. Table 25) pic.twitter.com/rcv711SYK2

Old-school 3D map of Aarhus city center. It hangs on one of the walls at the Department of Geoscience @AarhusUni. I took the pic last Friday, thinking how cool it is! #30DayMapChallenge pic.twitter.com/Ztu6eQK2Ed

Here's also some time series for the Danish residents/citizens with Bulgaria as a country of origin. Data @DSTdk #30DayMapChallenge Day 12: Population pic.twitter.com/QKFIfBbssQ

Linoleum cutter is the new tool for Day 15 of the #30DayMapChallenge. Initially I wanted to show wells per geo-region, but it’s too much work, so I simplified the task a bit to just making a map of Denmark. We’ll see how the #linoprint looks like tomorrow. I’m still learning 🙂 pic.twitter.com/x5D7XffAO6

Day 15: Map without using a computer #30DayMapChallenge
Here is the #linoprint of Denmark (see the linocut in day 14). After printing these, I saw that Isefjord and Roskilde Fjord are missing, ups!
I used Fabriano paper & water-based lino ink by Schjerning. pic.twitter.com/c5JmrO8p1d

#30DayMapChallenge Day 18: Water
Distance from streams and lakes in DK. I tried a new QGIS plug-in (multi-distance buffer) & the cividis color palette. Almost everywhere there is a stream less than 2km away, lakes - not so many/often. pic.twitter.com/Ygc8jlKy0M

Day 24 #30DayMapChallenge
I am using the occasion to share the map of Denmark by Mercator from 1595. It’s from the book of Peder Dam “Kortlægningen af Danmark” published by Lindhardt and Ringhof. I know it’s cheating, but it gave me a reason to flip through the book this morning pic.twitter.com/jgszl7xcck

#30DayMapChallenge Day 27: Heatmap (day 29)
The density estimation is based on the location of the GRUMO wells (not the sampling points as in the previous maps this month). This is also an entry for day 29: NULL, as the active wells have NULL in the field "UDGAAET_AAR". pic.twitter.com/3pYpBAlRXl